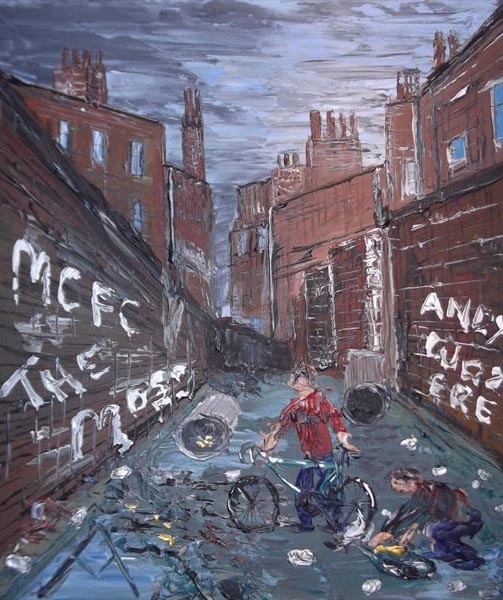 Some of the eleven paintings of Moss Side by me, Andrew Alan Matthews. Signed limited edition prints available.

Four paintings in the story are posted separately here: Penny for the guy; The Den in the Moss; Street football in the Moss and Mind yer car Mr.

Painting – Where the good things are

My first painting of ‘Where the good things are’ (shown above) highlights me and my friend Ricky searching old cobbled alleyways for discarded pushbikes to sell in Nevs second hand shop on the corner of Claremont Road and Cowesby street.

Where the good things are Rick Cowie and me  Collecting old pushbikes  In rubbish filled alleyways of Moss Side  in the 70s and 80s We would fix em up Ricky shouting hammer hammer  Didn’t have a stammer  sold em to Nevs second hand shop  On the corner of Cowesby street and Claremont road  We weren’t old       lookin for gold Yeah made money to buy Treats on the streets Football cards you flicked at a wall, Fireworks, bangers, jubleys, bubblies  black jacks and sweets  We did feats     on these mean streets  yeah where the good things are

This is a depiction of Nevs second hand shop on Claremont Road in Moss Side in the 1970s and 1980s. We used to sell pushbikes to Nev that we had rebuilt from discarded pushbikes found in the rubbish filled alleyways. We would get scalextric tracks and toy cars and money from him for selling the bikes to him. We would often see people chopping up drugs in the back of his shop. Nev used to rent his back room out to a reggae band, we would dance on the streets and play football as the band practised. Painted in Acrylic and ink and using a pallette knife to give depth to the artwork. Impressionistic urban cityscape.

Nevs second hand shop  Claremont Road Moss Side in the 70s and 80s we found old push bikes in rubbish filled alleyways  in the moss it was boss me and rick fixed em up  sold em to Nev got Scalextric tracks , toy cars and money  to get the honey yeah sweets and treats on the streets  he used to do drugs for thugs cokin and smoking         im not jokin yeah a reggae band at the back of his shop danced on the street in the summer heat played football, kick can,  knock and run  it was lots of fun       shared a jubbly or two  god help you if you were last in the cue yeah Nevs second hand shop in the moss  it was boss

Moss Side has a Carnival every year. As a child I remember it being colourful and there was always a great party atmosphere mixed with drug dealers selling their wares. I also remember a Pimp that used to ride down Great Western Street in his open top pink Cadillac with leopard skin seats and perched on the back were his three bitches (prostitutes) advertising their services.

Painting – Georges Barbers in the Moss

We used to go to George’s barbers to play on the Arcade machines and play pool. We worked out that if you put a electric gas fire lighter in the money slot it would register free credits on the machines and we would play for hours not spending any money, until the owner worked out what we were doing. they eventually put alarms on the machines to stop us doing this.

A depiction of Mr Floods toy shop that was on Claremont Road Moss Side in the 1970s and 1980s, Mr flood was a kind man, I used to buy airfix kits and toy soldiers and spent hours painting and making them. the shop was darkly lit and smelly as he had cats and a parrot on a perch as you entered the shop, he was also a pigeon fancier and had a coup in his back yard. He took me and ricky on holiday one year to his caravan in wales. Painted in Acrylic and ink using a pallette knife for depth to the artwork. Impressionistic Urban cityscape.

Painting – Bonfire night in the Moss

Bonfire Night is a depiction of a piece of derelict land at the back of our house on Princess Road Moss Side (since been demolished). I remember the street glowing orange and the heat was intense. We had great fun sharing treacle toffee, playing dunking the apple and putting potatoes in the bonfire and setting off fireworks and sparklers. Painted in Acrylic and ink with paintbrush and pallete knife using the croquis method for the characters to show movements. Urban Cityscape.

Painting – the Moss Side riots

A depiction of the Moss Side Riots in the 1980s. We heard an explosion whilst sitting in the living room in 222 Princess Road. There was a riot taking place, looters were robbing the shops. turning cars over and firebombing them. My family and I sat outside on deckchairs with cups of tea watching the events unfold. Rioters and families were emptying the shops, filling up trolleys with food and goods, returning time and again. Two families started arguing in the street over a settee and 2 chairs and fights took place. My friends saw somebody with a gun and Ricardo Cowies Dad was on top of his truck with a baseball bat fending off the thugs. There was a lot of unrest within the black community with stop and search practices by the police and a programme called Roots stirred a lot of racial tension in the area as well.

The Moss Side Riots  Heard an explosion a riots taking place  Yeah it’s the eighties  Looters robing the shops Turning cars over       and firebombing We sat outside on deck chairs  with cups of tea on me knee We didn’t flee  Rioters looting the shops  filling up time and again  then two families argue on the street Over a settee  Black maria comes calling People are ballin Friend saw a man with a gun,     wasn’t fun Yeah black unrest in the Moss  Over stop and search  Racial tension running high  An outcry  Yeah the Moss Side riots  in the eighties  might happen again so think again

Painting – The Egertons in the Moss

My friends family in Moss Side

The Egertons In the Moss Had a green grocery shop in the Moss  A family business that did the business  There older now  a life filled with love  They’ve stood the test of time for all time Had a few tears      ups and downs  Albert and Hilda  Had three kids  Mark, Mike and Pete  Always on heat on the street They Banged the ball on the street with there feet  Yeah kids in the moss it was boss All Grown up now got there own lives and wives yeah a family unit  with kids and grand kids to carry on the family name  yeah the Egertons  Remember the days in the Moss Cos it was boss  So as you go through life  Remember your family and friends love you  So here’s to you  all Your family and friends wishes you well  So Take care  stop and look and stare  at this Painting cos your family surround you  with love on there mind  cos your all kind  and with the Moss on me mind  just want to say to you all we had a ball  Yeah the Egertons n the moss Just boss

A story about growing up in Moss Side Manchester City, Maine Road, A cityscape / landscape painting looking back on past times when I was a child, remembering when I used to live and play in Moss Side, City used to open the gates at half time allowing the local kids to watch the second half of the game for free. We had great fun running down the tunnels and watching the game. My favorite player was Colin Bell. Painted in Acrylic with pallette Knife and ink outline using the croquis method to bring the characters to life, showing a bustling crowd going to a game.

I hope you like the artwork, stories and videos please feel free to leave feedback and comments on my website andrewalanmatthews.co.uk