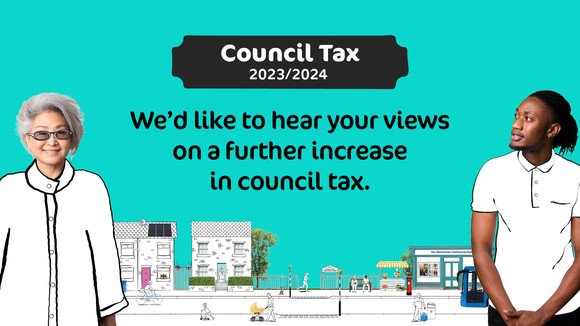 " We would like to hear your views on revised council tax proposals for 2023/24. Your views will help shape the decisions we need to take around council tax increases.

Our other budget proposals remain the same, so if you gave views on these in the earlier consultation, they still stand.

Circumstances have changed since we previously asked you about our budget for 2023/24.

The Government’s Autumn Statement has moved the goalposts considerably. They have decided that council tax can now increase by up to 2.99% in the general charge plus an extra charge (called a precept) of up to 2% to help fund adult social care. This means there can now be a 4.99% increase without the need for a costly local referendum – 2% more than the original limit which is what we had originally proposed and consulted with you about.

The Government has put off making the most difficult decisions about funding cuts to address the black hole in public sector finances until 2025. It has also provided some additional funding to help us support the most vulnerable.

But while the immediate position is not as severe as we anticipated, we still need to plan now for tough times looming on the horizon to ensure our funding is sustainable and we can continue to provide support to those who need it most as well as the services everyone needs.

Our funding allocation from Government effectively assumes that we will increase council tax by the full amount now allowed. If we don’t do this it may impact on future funding settlements, with the Government assuming the Council has more money than we actually do.

From speaking to other comparable councils we know they have reached the same conclusion which we reluctantly have – that there is little choice but to look at raising council tax in line with the new limit.

We are therefore now proposing to increase general council tax by 2.99% plus a 2% adult social care precept – a 4.99% increase in total.

Putting up council tax is not something we do lightly when we are acutely aware that there is a cost of living crisis facing many of us.

But the extra money for adult social care will enable us to support the social care sector more, helping to relieve some of the well-documented pressures on the NHS. We will also be able to provide more targeted help for the most vulnerable people in our city.

Funding from the extra 1% on council tax will also be targeted at supporting our most vulnerable residents and the voluntary sector who do such valuable work in our city.

Even a 4.99% increase will still be well below inflation and less than the increase to other household bills. Our strengthened Council Tax Support scheme will also mean that Manchester residents on the lowest incomes will get more help with their bills.

The Council’s financial position remains challenging against a backdrop of high inflation (even higher now than when we first consulted), rising interest rates and a volatile economic climate.

This comes on top of more than a decade of central government funding cuts to our budget, even as our city and the need for our services grew. Manchester was one of the hardest hit places in the country by these cuts. Since 2010 we have had to make £428 million of savings to cope with cuts to our government funding and unfunded budget pressures such as inflation and a growing population.

We still need to make savings to balance the budget over the next three years and have consulted on proposals as part of the previous consultation. If you have given views on these, they still stand.

We remain firmly focused on delivering your priorities – from overseeing the building of 10,000 affordable homes over 10 years to leading the charge to become zero carbon by 2038; from promoting a healthier and happier city to creating vibrant neighbourhoods and investing in your parks and roads.

Your views in this consultation will help inform decisions about council tax levels.

Government rules currently allow us to charge a 100% council tax premium on any unfurnished homes that have been empty for over two years, doubling the charge absentee owners must pay. This is to encourage owners of long-term empty properties to bring them back into use. Planned changes to those national rules would reduce the period after which we are allowed to charge double to just one year. We are considering charging owners and landlords the extra 100% premium after one year.

In addition, national changes in the offing would allow councils to charge a 100% premium on empty, furnished homes (second homes and rental properties between tenants) as well. This will mean second home owners and landlords with furnished properties will pay double council tax for any period that their property is empty. We are also considering charging this higher rate of council tax for empty, furnished properties if we are allowed.

Take part in the consultation.

Have your say on our proposals by Tuesday 7 February 2023. "

Could not find route!

Weather data is currently not available for this location

Exhibition: Althea McNish — Colour is Mine
18 Dec, 2022The Whitworth Gallery